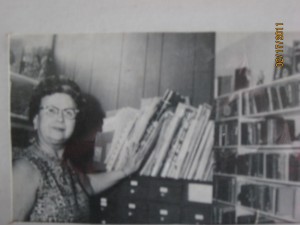 This Library is dedicated to the memory of

Dorotha Moscript whose dream is our reality.

The Zenda community was justly proud of their Community library, located in the rear of the former Zenda State Bank building(currently the Zenda Museum) on Main Street in the summer of 1961.  When the books from the grade school became available during the summer for the children to use.  During the summer of 1961 a resident of the community, who was moving into a mobile home gave the library his college books. This gesture was the beginning of the book collection for the community. Dorotha Moscript is the librarian. She is also employed by the Strong Insurance whose office is in the front of the bank building. The Zenda Library is truly a community project. The Strong insurance furnished the material to tile the ceiling of the library and a storm window. They did not charge her for the use of the rooms. The Zenda 4-H fathers installed the ceiling, the Zenda H.D.U. (Home Demonstration Unit, now HEU)donated the electric marking pin and painted the walls with paper furnished by a Zenda couple. A Sunday School class of the Zenda Methodist Church bought the paint and painted the shelves which were built by the Industrial Art teacher from Zenda High School. Members of the 4-H donated hours of their time to straighten books. It would be impossible to name everyone who has helped make the Library possible.  She asked the local high school librarian for help to learn how to catalog and set up a efficient library. As the collection grew, Mrs. Moscript gathered a group of interested people with Ernestine Gilliland from the Hutchinson Library,  they learned about laws that would get a library started with proper funding from the city and the township. Every three months the library would receive 200 books from the Traveling Library Commission in Topeka. (Our rotating collection as we know it now comes from SCKLS, South Central Kansas Library System in Hutchinson).  It was stated in the 1961 article that the Zenda community is to be complimented on their community spirit, their loyalty, and their willingness to work together for the good of the community. Much of the success of the library is due to the enthusiasm and interest of the librarian who spent hours of time and energy working on the project which began “small” but has grown “big”.   The 1st library board meeting for Zenda Library was held Aug. 18, 1966 with officers of Pres. Joe Dirks, Vice Pres. Iva Rickard, Sec. Kathleen Whitmer, Treasurer Bernadine Werner.  Board members to serve were Harold Borgelt, Mildred Ford, Bob Otto and New Librarian Carolyn Nicholas.  The Library would be open 8 hours a week,  and has always prided itself on being a help to the community.  In approx. 1967 the Zenda Public Library was moved across Main Street of the former City Bldg. The Summer Reading Program was started in Zenda the summer of 1968 with 60 children attending. Some of our librarians and helpers from past minutes have been Judy Vierthaler, years of summer reading programs and worker, she left the library in June 1982 when she married and moved.  Dorotha Moscript retired effective Oct. 1, 1975 with Irabelle Oak becoming Librarian. Delia Swingle was a helper from spring 1975 until 1991 (Librarian from March 1987 to Nov. 1989 when she went to work for Miller’s Oilfield Service in Spivey, KS).  Aurora Dick was Librarian from Jan. 1978 to March 1980.  Librarians and helper in 1980 was recorded in minutes as Delia Swingle, Judy Vierthaler, Jackie Hageman and Teresa Goetz. In 1988 Delia Swingle submitted a write up on the Zenda Public Library with the help of Kathleen Whitmer, board member of 30+ years and received the “Outstanding small Public Library” Award which the Library received $500 provided by the South Central Kansas Library System, headquartered in Hutchinson. Librarian Delia Swingle and Cheryl Kanngiesser recieved the award. “Zenda Library was chosen outstanding because it has developed and provided basic library services: and because of its exceptional community support and involvement. Clearwater Public Library also received this award for 1989. Kathy Price was Librarian from Dec. 1992 until July 2006, Janene Gillen was Librarian from Dec. 1999 to Sept. 2000, Pam Dick was Librarian from Sept. 2000 until March 2010 when she retired from sudden illness.  Acting Librarian, Delia Swingle is there as of today with helpers Georgia Woodard starting date is Sept. 1998 and Amy Hageman start date is July 2010 and many of the board members helping to weed books,process books and reinstating the book buying day when board members and librarians shop for new books as we did in the 1980’s.  Continuing to keep the community involved and working together side by side.    Feb. 17, 2011